The long-awaited Stad Ship Tunnel in Norway is on the verge of becoming reality. Jasleen Mann reports on the first tunnel in the world to be built exclusively for shipping.

The Stad Ship Tunnel is a planned canal and tunnel to bypass the Stad peninsula in Stad Municipality in Vestland county, Norway.

While the Stad Ship Tunnel project is primarily considered as a maritime safety measure, other benefits, including tourism and improved passenger experiences, have also been identified as the construction of the tunnel will allow for a shipping alternative to existing routes.

Havila Kystruten has offered its support to the Stad ship tunnel project. In September, the Stadland Ship Tunnel Conference was held on Havila Castor, which sailed into the Hjørundfjord for the first time.

The Norwegian Coastal Administration, the project owner of the Stad Ship Tunnel, is responsible for all infrastructure along the Norwegian coast.

“We are working to ensure that the Norwegian coast is the safest and cleanest in the whole world,” says Norway coastal director Einar Vik Arset.

“Projects such as the Stad Ship Tunnel are important measures to realise our goals. The consumption of fuel increases significantly on high seas, and by sailing in brackish waters in the ship tunnel, we will reduce the consumption of ship traffic in the area.”

The Stad Ship Tunnel will be 2.2km long, 50m high and 36 metres wide so that vessels have safe passage through Stadhavet Sea, with the project reaching an estimated cost of NOK2.8bn excluding VAT ($270m)

The steering group for development work around the tunnel, as well as the growth companies in the municipalities of Stad, Kinn and Vanylven, organised the conference to address opportunities for moving passenger transport and goods to sea, improving safety, regularity, and punctuality.

Topics included green shipping, the Ålesund-Bergen express boat connection, creating value in the seafood industry and the role of the Stad Ship Tunnel and the Stadland in international tourism. 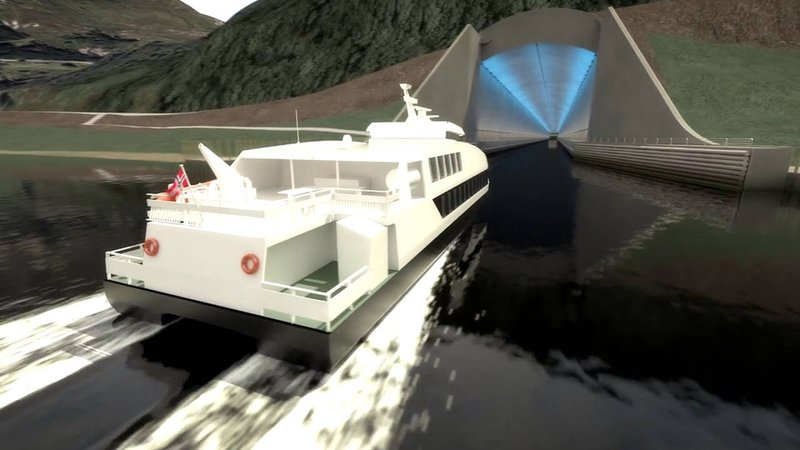 “The Stad Ship Tunnel will increase maritime safety around the Stadland, which is among the most weather-exposed areas along the coastal route we sail every day,” says Havila Kystruten CEO Bent Martini“

“At the same time, we believe that sailing through the Stad Ship Tunnel will be a tourism experience that is quite unique in the world, and of course, we will sail completely emission-free on pure battery power when we sail through the tunnel.”

The sea outside Stad is called Stadhavet, characterised by demanding wave conditions for shipping 90 to 110 days a year. Maneuvering conditions are made difficult by the high seas with wave reflections.

Per Sævik, chairman of the board at Havila Kystruten, says: “The tunnel, Selja Kloster, and Stadtplatået, in my opinion, could become the North Cape of Western Norway.

“Managed well, we have a unique opportunity. In terms of the market, the Stad Ship Tunnel can hardly be valued highly enough for the importance it can have.”

The market importance of a ship tunnel in this area is emphasised as it will benefit the tourism industry and as a result, the local economy.

There will not be any charge for vessels to use the tunnel. However, the pilotage regulations will apply, meaning that vessels over 70 metres without a Pilotage Exemption Certificate will have to use the pilotage service.

In terms of monitoring traffic, the standard red and white light system will be used but vessels may also be given a time slot by the Vessel Traffic Service (VTS) centre.

Lasse A. Vangstein, head of communications at Havila Kystruten, says: “We think it would be a great addition to sea safety and also growth in the region. The area has potential for unique experiences, meaning more tourists and increased value creation.”

Main image: Rendering of The Stad Tunnel entrance in the Moldefjord showing the road bridge above. Credit: Norwegian Coastal Administration